YA Book of the Month 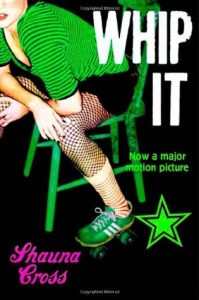 Skirts, Skates, & Scrapes!
All the old school skills with a new punk rock attitude
Come see The Lone Star Derby Girls
Austin’s All-Girl Roller Derby League
The Holy Rollers vs. The Fight Crew
Halftime Concert by the Chimney Sweeps
This ain’t no cheerleading clinic, y’all!Meet Bliss Cavendar, an indie-rock-loving misfit stuck in the tiny town of Bodeen, Texas. Her pageant-addicted mother expects her to compete for the coveted Miss Bluebonnet crown, but Bliss would rather feast on roaches than be subjected to such rhinestone tyranny.

When she discovers a league in nearby Austin, Bliss embarks on an epic journey full of hilarious tattooed girls, delicious boys in bands, and a few not-so-awesome realities even the most hard-core derby chick has to learn.

Place a hold on this book here.